You play in turn the dispatchers of emergency lines and first responders in the greater Montreal region. You must complete the challenges of emergencies that present themselves to you by collaborating: one person reads the map of the situation and the other must pass the corresponding challenge on the smartphone application.

Goal of the game.

Resolve all of the day's emergencies and save the city!

One event card per district is randomly placed on one of the two available spaces, and then the players place their pawn on the free event space of their choice and the three pieces representing the members of their intervention team near him..

At each turn the players can do an action: either move from a round or rectangular space following the paths that connect them, or try to settle an emergency on its current space. If a player moves to a space with an emergency, he can immediately deal with the emergency without waiting for the next turn.

When a player takes up a challenge, he takes the smartphone with the application and another player (the one who has not been dispatcher for the longest when there are more than two players) take the event card, him says the event number and reads the card instructions to guide the player over the phone. Be careful, some cards have words indicated on the card that the dispatcher should not say out loud.

If players fail a challenge, their event card is placed in the discard pile and a new card replaces it. In addition, the player whose action it was (the one with the telephone) loses one of the members of his intervention team (but the team can still respond to three types of emergencies even if it has fewer than three members ). When a player loses the three members of his team, he can continue to play the role of dispatcher (read the cards) but can no longer actively intervene (he no longer has the telephone).

If four cards are stacked in the same place the game is lost.

After all the players have completed their turn action, new emergency calls are received and the event cards are placed according to the distribution decreed by the application.

When a zone has no more active events, it does not receive any more until the end of the game (it is indicated in the phone application that this zone is no longer active).

When the last emergency is resolved, our heroes finally have the rest they deserve, until the next game. 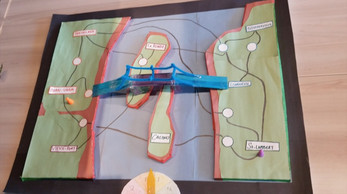